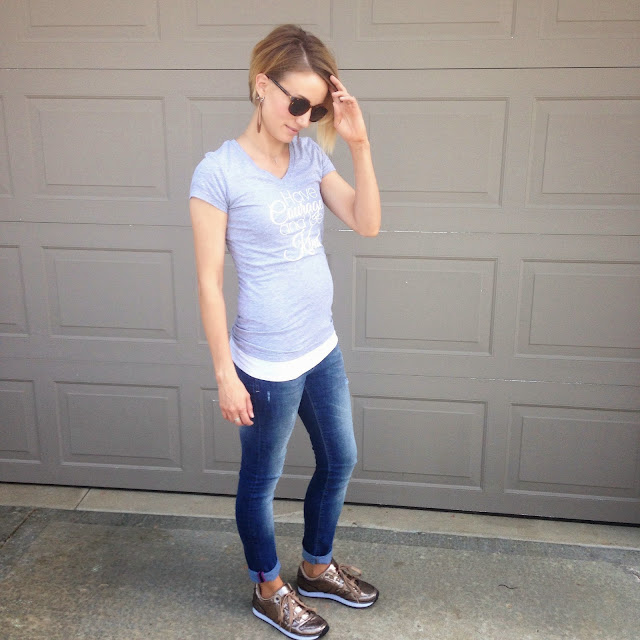 TEE- Brassy Apple c/o // JEANS- Asos // SHOES- H&M // EARRINGS- N&S (Brown Cut Out- large)
Well I’m 12 weeks along now and almost in the clear with my first trimester. I’m starting to feel more alive and like myself so I thought I’d share a bump pic and update you on the last 12 weeks.
How I found out I was pregnant: Well, we’ve been “trying” for our fourth for a while now. As many of you know, I had a miscarriage in October. So technically we have been trying to get pregnant since last August. After my miscarriage I didn’t know how long it would take to get pregnant again and there was that sinking fear that maybe I wouldn’t be able to get pregnant for some reason. (All certainty about anything goes out the window when you get sideswiped by a miscarriage.) But we didn’t do use any preventative measures and decided when it would happen, it would happen. And sure enough, about four months later my cycle was late and I decided I better grab a test while I was at the grocery store. (I always feel awkward buying those things!) I peed on the stick and sure enough, I was late for a reason!

How I broke the news to Soren: We aren’t into a lot of hoopla around here so as soon as I took the test I called him. Typically he would have been home, but I think he was out running errands that day. He was excited and that was that. We didn’t tell anyone else for a few days and then I figured I better tell a few people (like my mom!) before I blogged it.

How has this pregnancy been different: I think I’m more aware of the changes brought on specfically by pregnancy. In past pregnancies I think I feel blue or not like myself, but this time around I can see it pretty clearly starting when I got pregnant. So maybe I’m more self aware…

Weight gain: No idea. Don’t plan on finding out. I know I’m up a size but numbers don’t do me any good so I’m not looking.
Is anyone else due in November too? How has your first trimester gone?