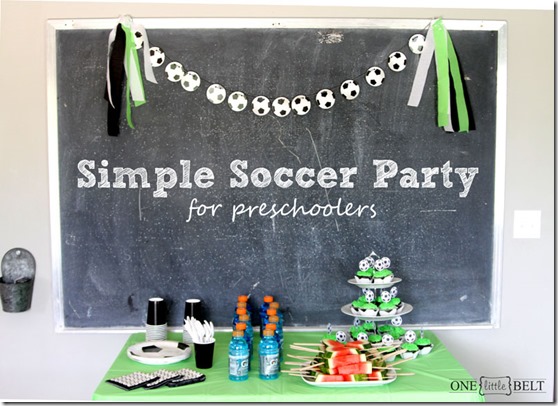 The day after Easton’s third birthday party, which was football themed, he told me his next party was going to be a soccer party. I dismissed it a little bit, thinking he would change his mind, but sure enough one year later, what kind of party did we have? A soccer party for our big four year old.

In the past I have stressed out too much about the kids’ parties, so this time I tried to keep it low key, but still fun for him and cute for me. We stuck to green, black and white for the decorations and I bought most of them at Walmart. I grabbed the cheap green table cloths for the tables, black cups and white plastic utensils. 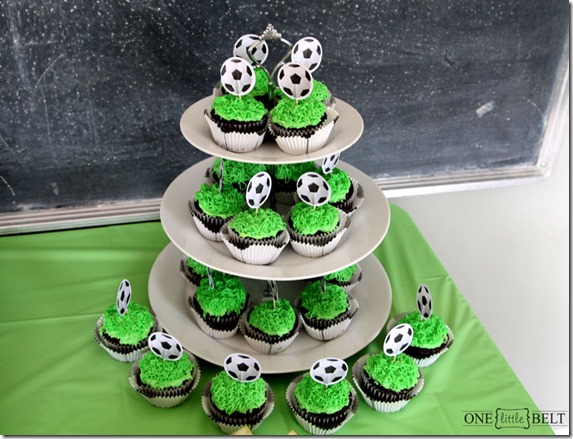 Instead of a big cake, we just did cupcakes. I found soccer cupcake liners and toppers at Micheal’s in the dollar aisle. They made doing the cupcakes so easy! All I had to do was bake the cupcakes and then mix up some bright green frosting. I used my cake decorating kit to make grass with the frosting and stuck the toppers right in- so simple! 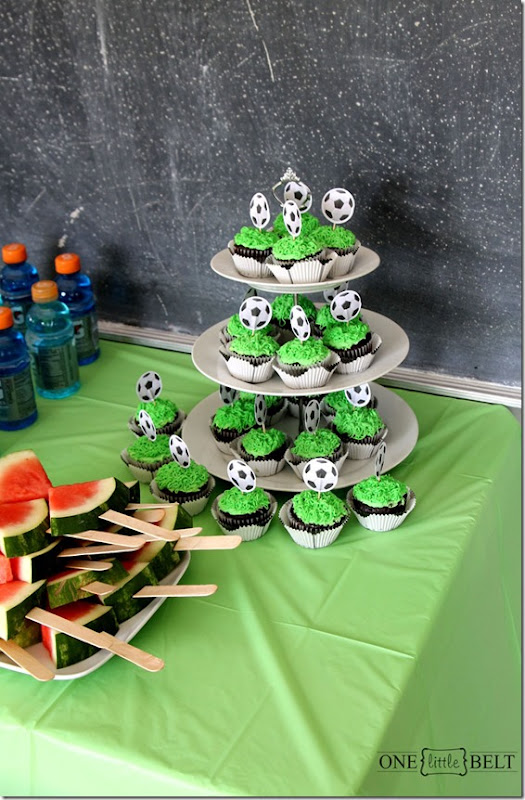 We invited about six other preschoolers to the party. Because the party was from 3:30-5:00 pm, we just planned for a light snack and treats. I cut up watermelon into triangles and stuck popsicle sticks in them for handles. We also had mini sport drinks for the little soccer players to cool off with. 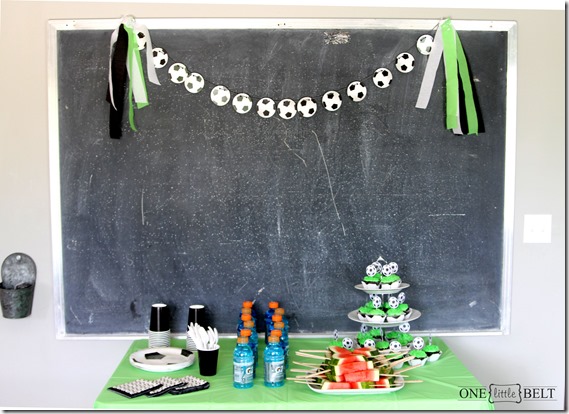 The soccer plates and napkins were also from Micheals. I was over the moon when I found them! 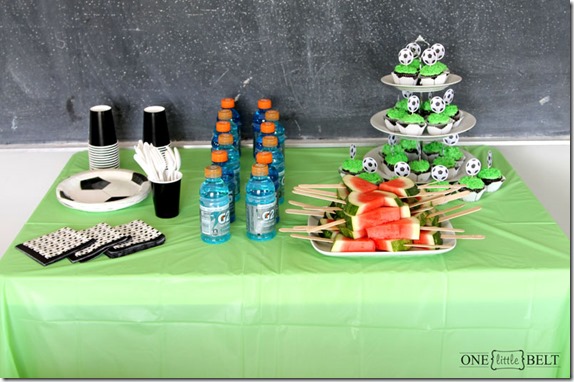 The other item I found at Micheal’s that was so helpful was a deck of playing cards that were circular and had a soccer ball image on the back. You can see below that I decided to use the soccer ball side as large confetti on the table. It made for a super simple table decoration. I also used the same cards to make the banner strung across the chalkboard over the refreshment table and another banner on the fireplace. 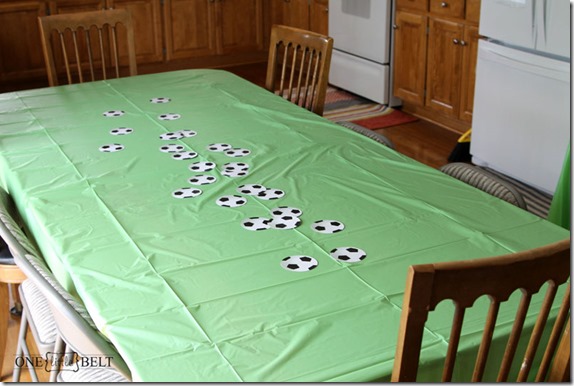 After all of our little athletes arrived, Soren took them outside for some soccer drills. We borrowed a small soccer net from friends and then had multiple soccer balls for the kids to use. They did some drills and practiced kicking goals. We also got out a t-ball stand and played whatever sport the kids were in the mood for. 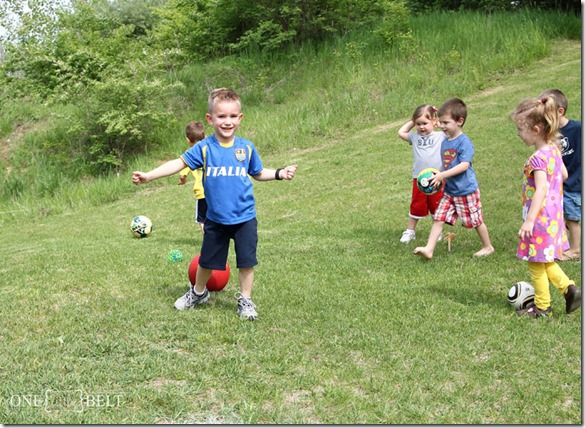 It was a hot afternoon so watermelon outside was a hit. It was just the right thing to hydrate and cool off with. They devoured the entire plate! 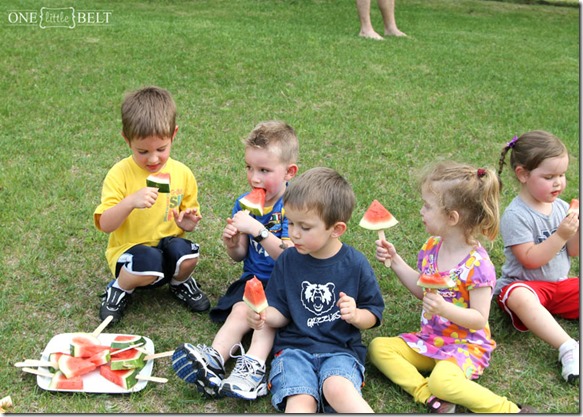 After a good sweaty play session, we brought the kids in. We played one more game inside. I had hot glued some of the soccer plates to paint sticks and gave each kiddo a plate-stick and a balloon. They had a blast trying to use their plate to keep the balloon in the air. I’ll admit it got a little dangerous as six little kids ran around with their eyes on their balloons and not looking where they were going! This game did double duty because each child took home their balloon and stick as their favor as well. 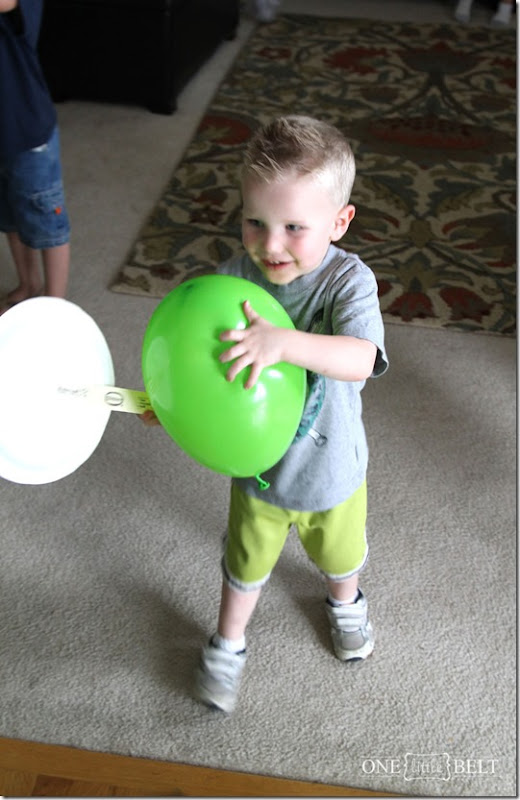 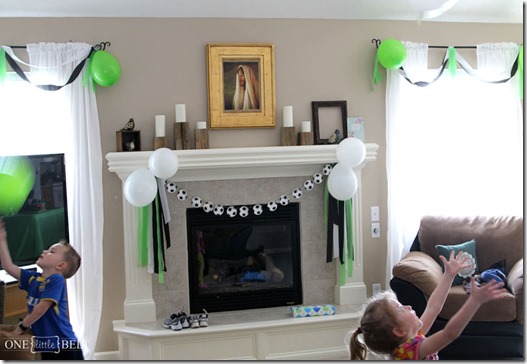 After games we sang to the birthday boy and everyone ate a cupcake. We didn’t even break out the ice cream (and no one noticed!). He opened up a few gifts and everyone was happy- even me. It was especially successful for me because it was budget friendly, simple and I wasn’t stressed the whole time from over planning. We all just got to enjoy and wish this little guy a happy birthday! 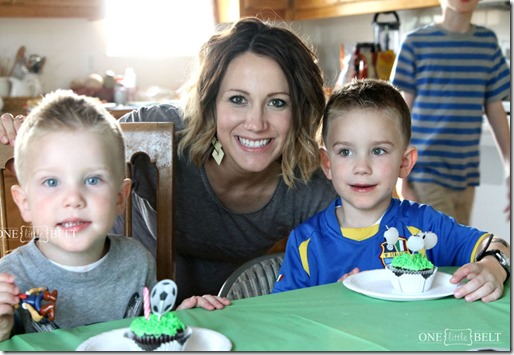 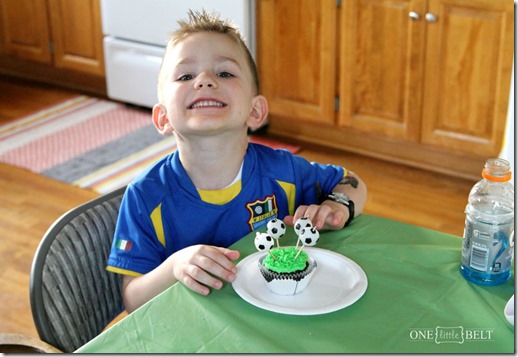