This last month has been a month full of painful stretching. There’s no other way to put it. I’ve been stretched before, but never like this.
On May 2, we woke up and started the day like any other. Our employees start showing up for work at about 9 a.m. and when the first one arrived, she asked me what was going on down at our building. I hadn’t heard anything, but she had seen smoke coming from the general area on her way to our house. I didn’t think much of it until about ten minutes later when my phone started blowing up with text messages. And photos. Of our building collapsing. 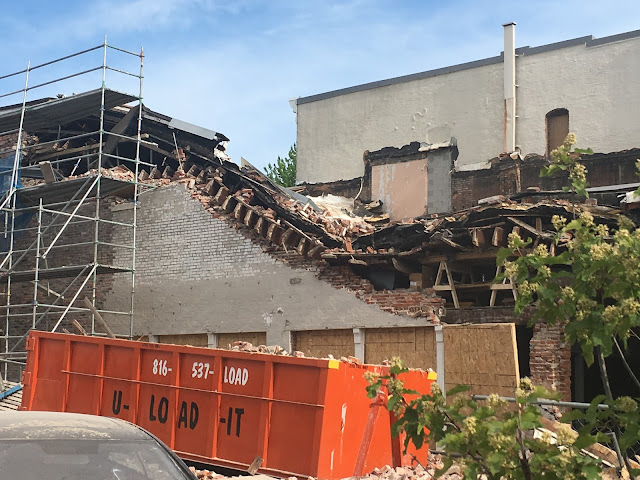 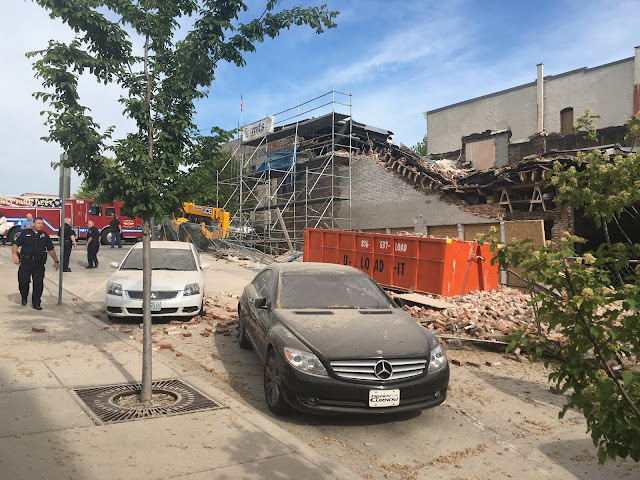 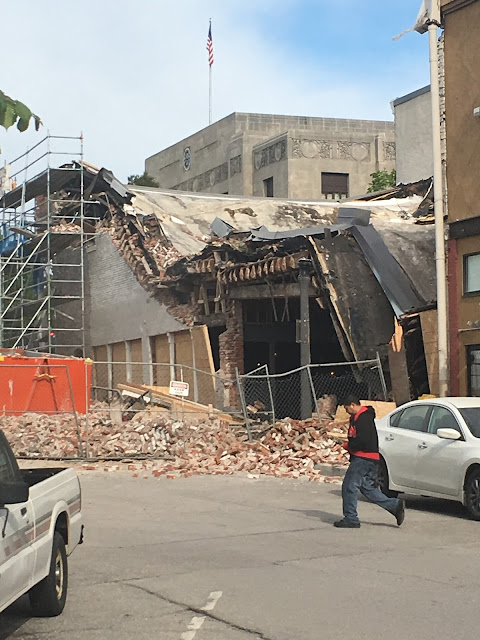 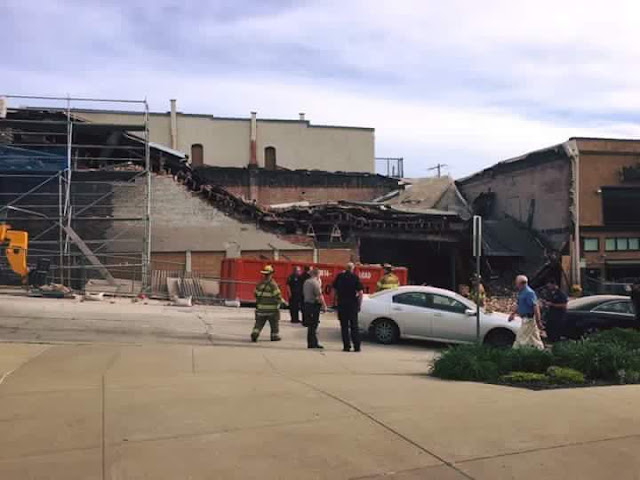 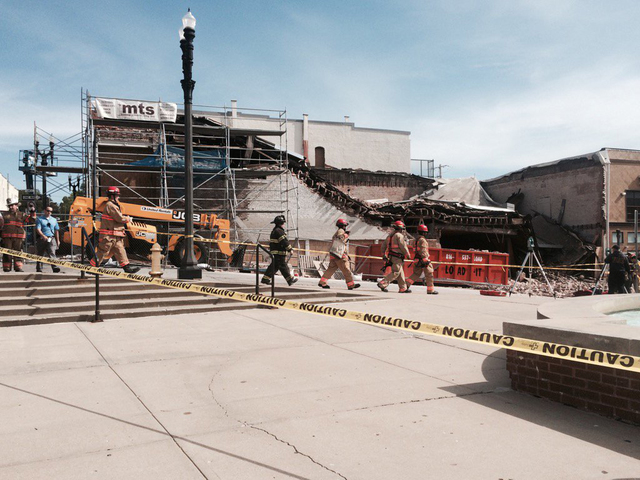 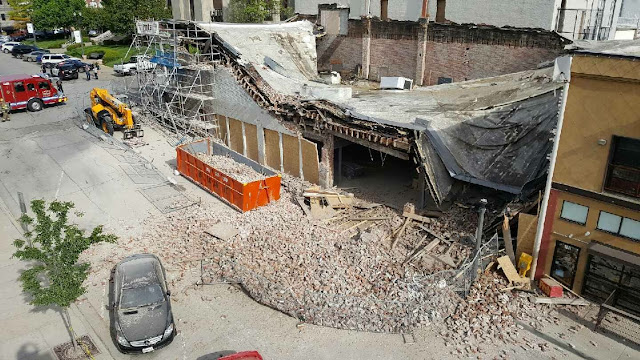 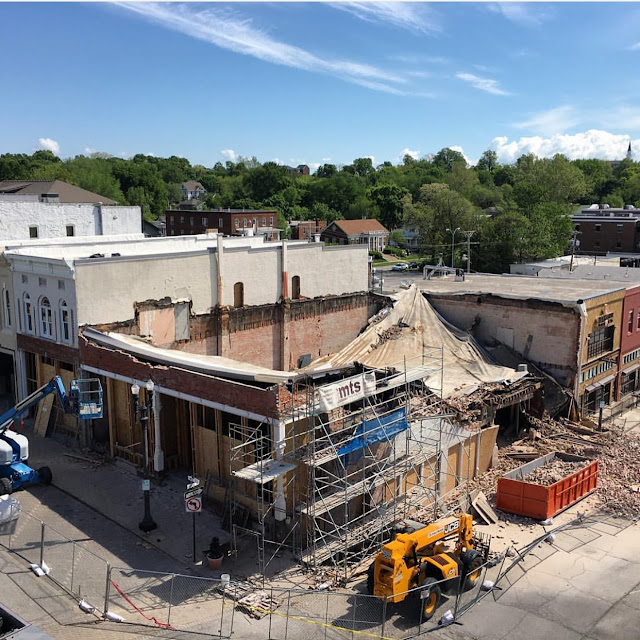 For the last eight months we’ve been making plans and working with our landlord to renovate a building on the historic square in our town. We had planned to move Nickel & Suede headquarters there. We’d been preparing to set up a small retail store, shipping and production and offices—even a little nursery for my baby to nap in. The building had been delayed, and so although we should have already been open, it looked like we weren’t going to be opening until late July.

And then something went wrong. Something structurally wasn’t supported, and the outer wall buckled. People nearby said it sounded like a train was going by and the dust was everywhere as if it were smoke from a fire. Our entire upper floor collapsed—right where Soren’s office and the nursery would have been. Crazy scary, right?!?

The most important thing is that no one was in the building. There should have been four crews in there working that day, but something had prevented all of them from showing up for work. Supplies hadn’t arrived or they got stuck at another job, but whatever the reason, they weren’t in the building when it collapsed. It is so, so fortunate that no one got hurt.

We also hadn’t moved anything into the building yet. The walls and the flooring still weren’t in, so we didn’t lose anything in the accident in that way.

When I heard what had happened I was just in shock. It was so surreal and unexpected that I didn’t even know how to respond. I was at home, so I hadn’t seen it in person, and it was really hard to think of all of the ramifications of this kind of accident.

And I was also a little bit occupied with what happened next.

While I was blow-drying my hair, Baker was waking up on my bed. And he rolled and scooted his way over to the edge. And FELL. Yep, it really happens and yes, I felt like a horrible person/mother/human being.

He fell and he cried, but I assumed that he was just scared and bruised. He also had come down with a cold the night before, so he was super snotty and coughing and generally uncomfortable. He fussed for the next two hours, and I just wasn’t sure which of the above reasons he was crying about. Finally Soren took a look at him and tried having him stand up on his lap. He wouldn’t put weight on one leg and really fussed if you tried to make him. So then we knew something was really wrong.

Thoughts of the building went to the back burner, and we got in the car to take Baker to urgent care. Soren tends to get sharp and snappy in stressful, out-of-control situations, so he wasn’t being very nice or easy to be around. I was feeling terrible and completely overwhelmed. We drove to urgent care and finally found out after an exam and x-rays that Baker had a buckle fracture in his tibia. He finally calmed down because they gave him some stronger pain killers, but I was still a mess. I had been nursing a migraine since I woke up, and once we finally found out what was wrong with Baker, the stress of it all set in. I ended up in the hall, sobbing, calling my mom to pick up my meds while Soren helped the nurses set Baker up in a splint. Before we were out of there, I had already thrown up and I couldn’t even carry Baker to the car. It. Was. Ugly.

(I do have to say that the doctor and the nurses were so incredibly helpful. They had all heard about the building collapse on the news and they felt so bad for us once they found out what we had been through that day.)

So I rode home nauseated in the back of the van. And we rolled up to the house only to find a news crew waiting to ask us questions about the building collapse. Can you believe it?! I just ducked my head and left Soren to talk to them. My mom met us at home with my meds, and I passed out for a few hours. 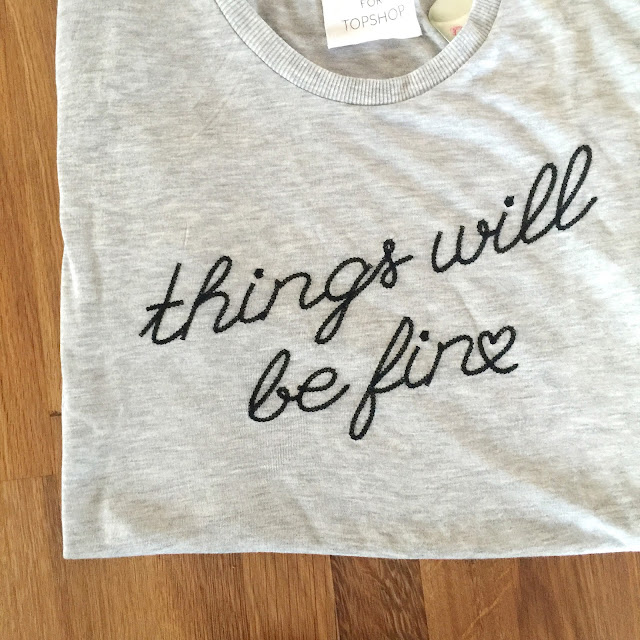 I woke up feeling more like myself and tried to pull things together. The mail came, and this shirt arrived. It was one of the only bright spots of the day and it definitely felt like a divine reassurance. Baker now had a splint and would be in it for two days until we took him to his casting appointment. 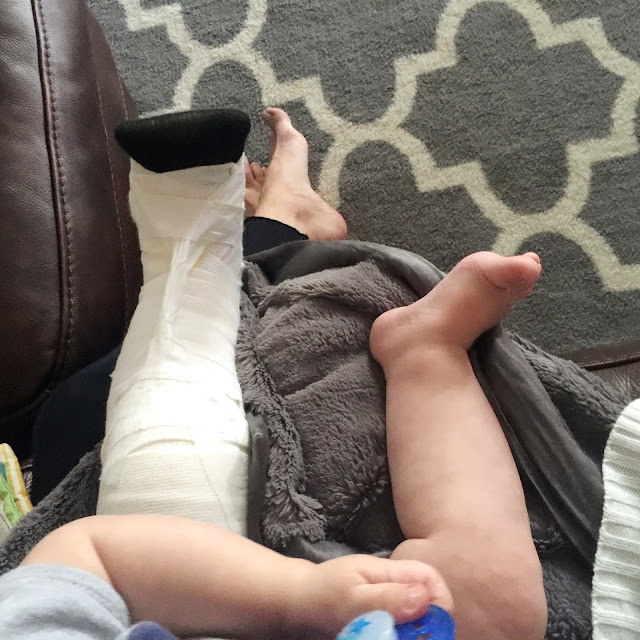 Over the next few days is when everything started to sink in. I started to realized what a setback this was for our business and how much work we’d need to do to adjust. I’d so been looking forward to all of our plans, and what to do next was at the front of everyone’s minds. 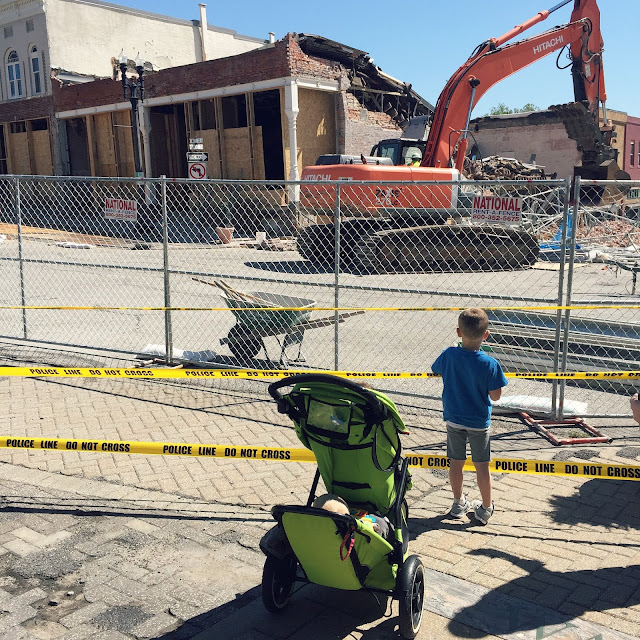 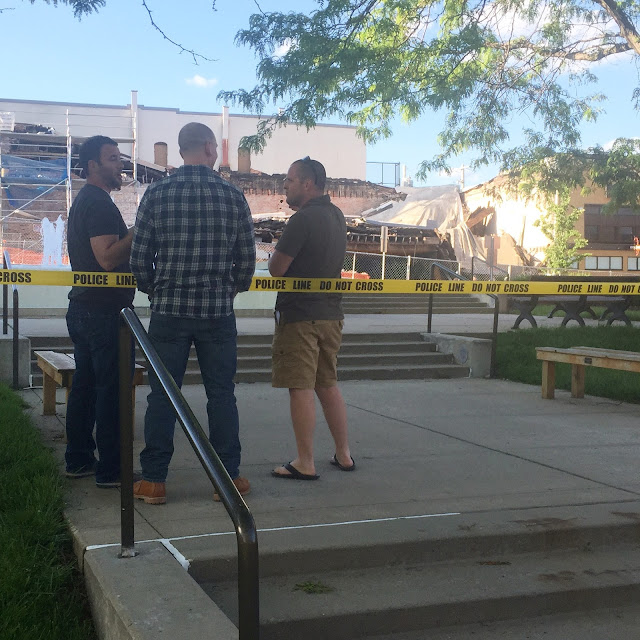 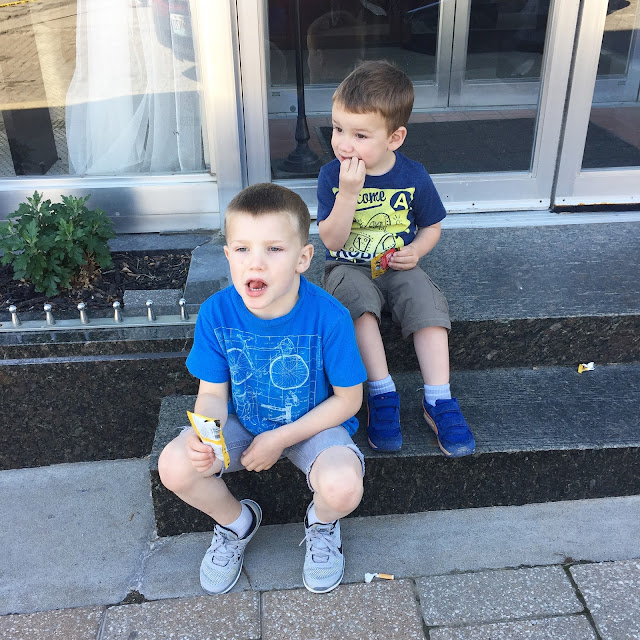 We went and visited the site several times, and at least the boys enjoyed it. They loved seeing all of the construction vehicles as they were cleaning things up. The roads didn’t open again for at least a week, and the collapse was the talk of the town. Baker also got his real cast on, and we started to figure out how to move forward. 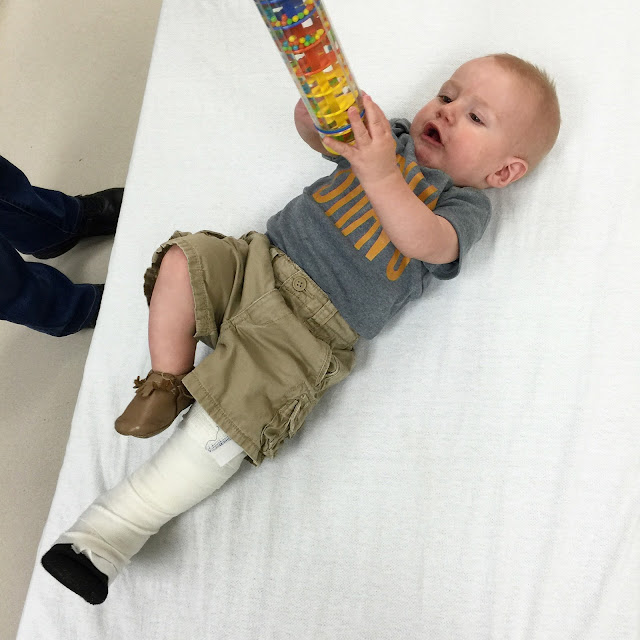 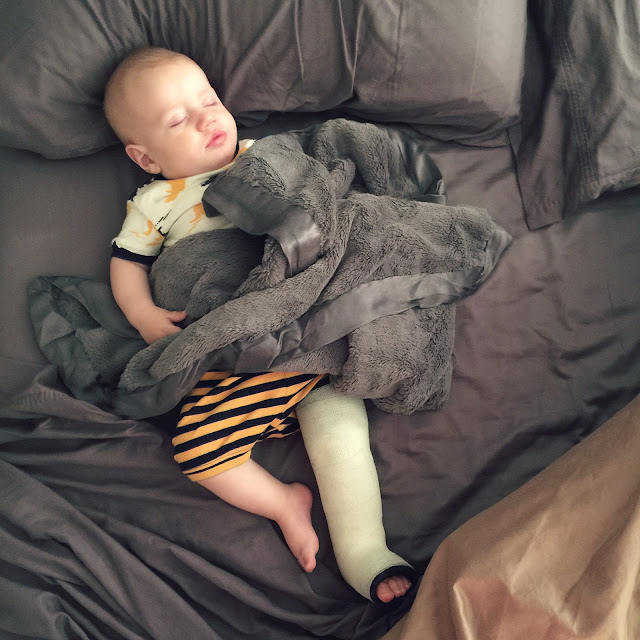 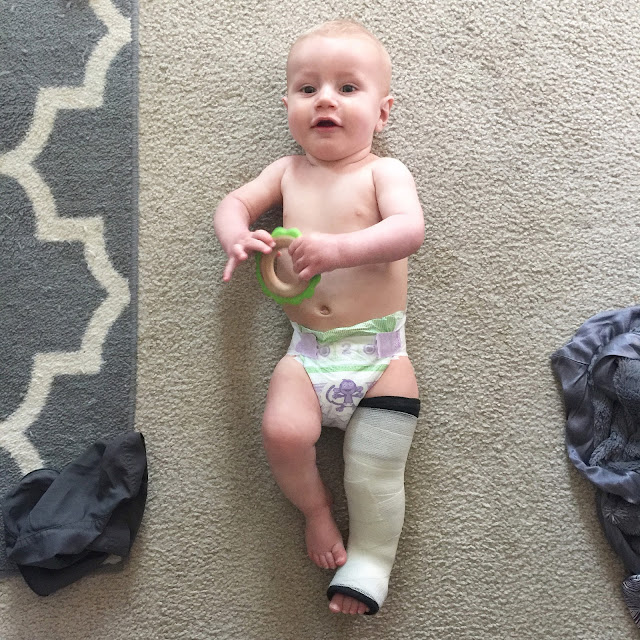 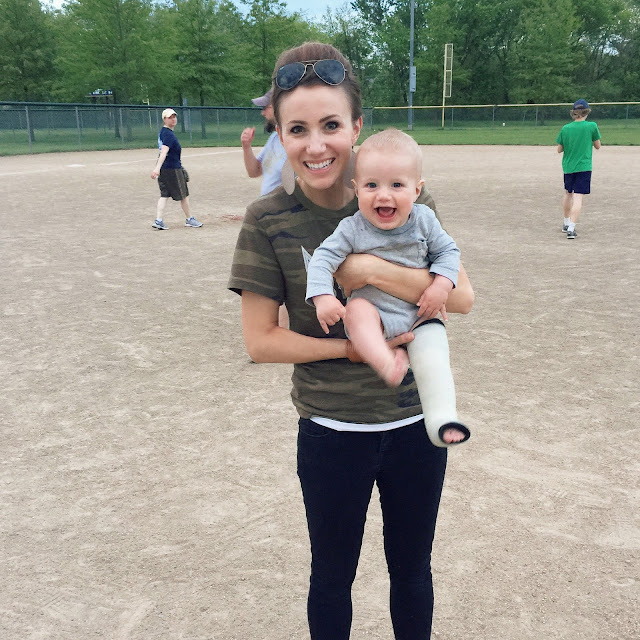 We have been trying to smile through all of this and have faith that better things are on their way. In the meantime, Baker has developed terrible sleep habits, our to-do list has tripled, and it’s been a struggle to shake off the exhausted, stressed, heavy feeling. And I recognize that as the stretching. We’re being forced to do things that seem impossible, and I constantly don’t feel up to the tasks of the day.
But I’ve been praying more than ever. And I can see that I’m having to put my faith where my mouth is. Every day I wake up and make the choice to do my best and believe that what needs to happen for our family and for me will fall into place. I’m certainly believing in things that I can’t see yet and having to trust God that He has bigger plans in mind for us. It’s a daily battle of feeling like I’m falling short and also recognizing the growth and the blessings that we see daily.
I’m so grateful for all of the friends, family, and community members that have helped us so much through all of this. It can be hard to accept help, but we’ve had so many people offer and come and do just what we need. We appreciate the prayers and the thoughts and all the love that you have sent our way.
I’ve got a follow-up post coming soon with the most recent updates as to how things are working out. And they are, just not exactly as we had planned. But I’m sure that is a good thing, because it’s His plan I’d rather be going along with.